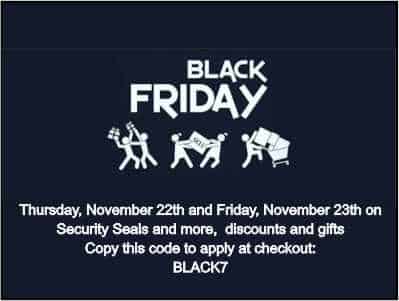 The Black Friday of RFID SEALS AND LABELS is there again this year!

On Security Seals and more we will not only apply a discount on ALL OUR PRODUCTS AS SEALS, ENVELOPES, TAPES, BAGS, SAFETY LABELS and mainly our special CHRISTMAS RIBBONS but you will also find our gift!

Always present with small gadgets in your purchases, we have concluded a fabulous contract for our shipments with the best Italian couriers!

But do you know the history of the Black Friday?

Black Friday is a tradition born in the United States because it is the first Friday after Thanksgiving Day that starts the Christmas shopping with special discounts that recently extended all around the world!

On this occasion, the big stores are used to offer remarkable and exceptional promotions in order to increase their sales in November, without having to concentrate all the receipts in December.

For this reason, among the people who shop at Black Friday, a good part spends the night outside the store where they want to shop the next day waiting for the doors to open!

In 2013, in the United States, 57.4 billion dollars were spent in one day by more than eighty million people: to make a comparison, it is as if the entire population of Germany had gone shopping on the same day!

Here how important Black Friday is!

The exact origin of this event is quite uncertain: according to some, it would refer to the accounting records of traders who traditionally went from red (losses) into black (earnings).

Therefore Black Friday would indicate a day of big earnings for commercial activities.

From that day on would begin the most profitable period of the year for retailers and stores, able to bring their accounts “into the black” therefore earn profits.

In Italy that period lasts until January when start our traditional Sales.

In 1924, the day after Thanksgiving, the Macy’s department store organized the first parade to celebrate the beginning of Christmas shopping but it was only during the eighties that the Black Friday exploded in the United States; it subsequently became popular in other countries such as Brazil, France, Germany, United Kingdom and Spain and is now widespread on all the most famous e-commerce web sites.